Everything was a bit of a disaster in my last post, but it wasn’t actually the end of the world like my brain kept telling me.

The jumper is flying along now and should be finished in time for posting at the weekend.

I haven’t seen the recipient for about a year, and have very little interaction with children in general, so I have no idea if it’s going to fit right. My hope is that it will either be the right size or have a little room for growth.

And I’m extremely happy to say that the pizza dough was perfect, which is handy as I made enough for five pizza bases!

I’m just going to sit and play computer games tonight because I don’t think it’s safe for me to attempt any more making.

First, I came to put aside sleeve stitches on the Good Old Raglan and realised I’d done the increases COMPLETELY wrong. There were 4 increase lines equally spaced around it, rather than the correct spacing for sleeves and body. I tried tinking back but then couldn’t work out where the stitch markers should go (thanks to some short rows at the neck) and ended up frogging the lot to start again.

Then it was time to start the prep for sourdough pizza so we can have it tomorrow. I measured everything out and thought it was a lot, but told myself it just seemed like a lot because I’d halved the recipe last time.

Turns out I hadn’t noticed there was a wee tip of a butter knife under one corner of the scales so all the measurements were completely off. You’d think I would have twigged when it used up nearly a whole bag of flour, but noooo.

My dearest hope is that all the measurements were off the same amount so it’s just a lot of useable dough, rather than a waste of starter and so much flour. There’s only one way to find out.

So I give up on today. Hopefully I’ll get my mojo back tomorrow.

It recently came to my attention that there is less than a week of November left. ARGH!

My friend’s little girl has a birthday at the beginning of December, and I was always planning to make her a jumper, so I started a Good Old Raglan (Rav link) immediately.

It doesn’t look like much yet. I’ve got loads of spangly yarn in different colours so I’m planning some big, chunky stripes from blue to purple to pink. Keep your fingers crossed that it works out as I’m imagining.

I got a bit (by which I mean totally) distracted by knitting cables last week so my socks still aren’t quite finished. I regret nothing.

One solid evening of work and they should be done and dusted.

Because I always end up doing silly things like this:

I missed the knit stitches between two cables, and didn’t even notice until I got to the next cable round. I do so wish I’d noticed earlier because this yarn does NOT like to be tinked. That was a painful four rounds.

But it’s all sorted now and I’m on to the home stretch of ribbing. I really can’t wait to get this finished so I can snuggle up in it at my desk while I’m working.

I love me a good pattern test, and I love knitting cables, so when Cinna Knits put out a call for testers I jumped at the chance.

This is just over half of a mini Chaos Cables cowl and I’m loving it. I’m already mentally digging through the stash for another yarn to use in the middle of a larger version.

You guys better get your hands on this when it comes out – it’s awesome!

These Diagon Ally socks feel like the quickest pair of full length socks I’ve ever made. I can’t wait to get them finished and onto my feet.

Then I’ll be on the lookout for a new pattern to try, does anyone have any suggestions? I’m pretty new to socking, but willing to give anything a go!

How can anyone be mad at a Friday?? Plus 13 is my favourite number, and occasionally my birthday falls on a Friday the 13th, so I love it.

I’m ‘celebrating’ by having yummy mushroom and spinach burgers then dealing with some really strong ninjas in Zelda, all while snuggled up with the boyfriend.

Also probably finishing my sock because I’m already on the toe so I may as well.

What are you doing for Friday the 13th? Are you superstitious?

Having a job isn’t helping me keep track of days at all, so no alliteration for today’s post title. I’m sure we’ll manage.

I have finished the first sleeve on the boyfriend’s jumper, but haven’t picked up stitches for the second one yet.

If you think that sleeve looks a bit long then you’re right. The boyfriend and I like our jumpers and coats to come down past our wrists, for maximum warmth and snuggly-ness. He has tried it on and approved.

The blanket is coming along nicely, with four squares now finished. 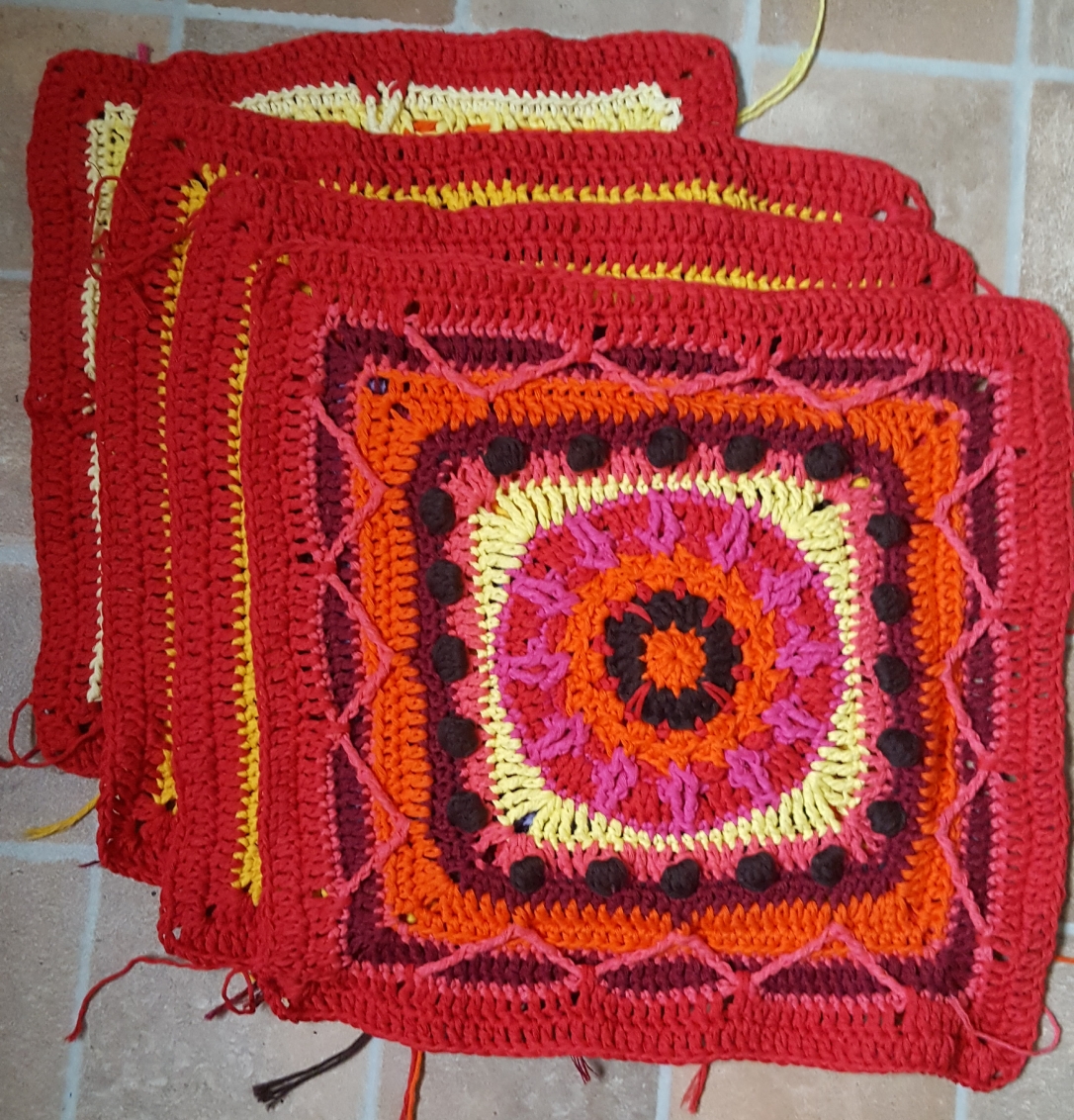 I’m dithering a bit over that latest square. It’s all very red and orange and part of me wants to sub in some more yellow in the second one, but I also want to stick with the pattern and keep both squares the same. What do you guys think?

Have I mentioned that Diagon Ally is addictive? I started a pair for myself last week and so far I’ve knitted them on the sofa, in bed, in the car, on a park bench, and in a cafe!  All this work means I’m already halfway through the first foot.

I’m using the Schoppel Boots yarn bought in Dunoon, just to see how the cotton content plays along. So far I can’t tell much difference from my usual wool/nylon yarn except that this feels ever so slightly rougher on my fingers as I work with it. It’ll be interesting to see what effect soaking/blocking will have when I’m done.

As for the shortie sock, that has been frogged. I hadn’t worked a stitch on it for weeks and it was on the verge of becoming a UFO so I bit the bullet and pulled it all out. Part of me is sad that my plan for the socks didn’t work out, but mainly I’m relieved that I don’t have to keep working on something that wasn’t making me happy at all.

So that’s my sock news for this week. What’s everyone else working on?

I’m really not getting through stash mountain as quickly as I hoped. That seems to be what happens when I can’t stop knitting socks; they’re such addictive little things, but not exactly yarn munchers.

All I’ve managed this month is a pair of socks for the boyfriend and two blanket squares. 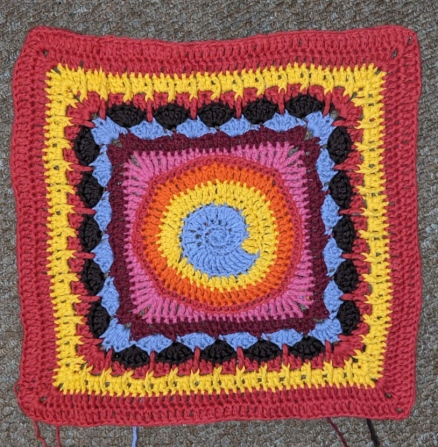 Of course, stress-buying yarn isn’t helping either. I really am trying to cut down on that.

I’m now starting to think about Christmas presents, as well as a couple of December birthdays, so there should be something other than socks and blankets to show off this month! Even I’m looking forward to that.

Ooft what a Monday already. It just took five hours and six phone calls for the helpdesk to do a fix on my laptop that took LITERALLY FIVE MINUTES.

The plus side to being unable to work at all is I’ve just finished the boyfriend’s Diagonal Ally socks, ends sewn in and everything!

I cannot recommend this pattern enough. I have mentioned many, many times that I hate to knit ribbing, but for some reason it feels so easy with these that I’m already planning to make another pair. For myself this time.

I just love the way they look!