You may remember I did a little experiment last week with some sun catcher paints. Well the results are in with some mixed results.

Firstly, greaseproof paper is a no-go, as the liquid made it crinkle so I ended up with some thick bits of paint and some wafer-thin bits. The thin bits cracked as I tried to peel them off the paper. 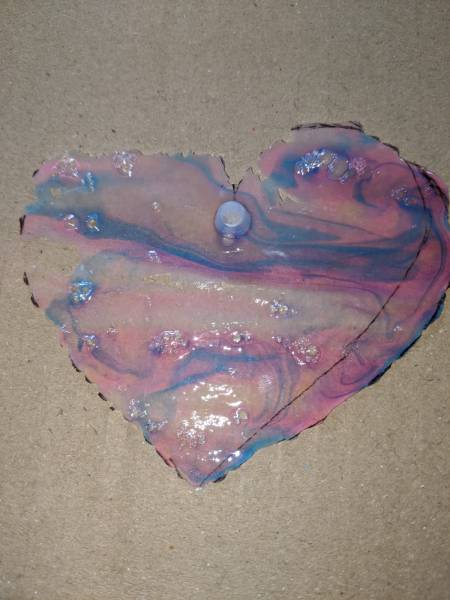 Also, I didn’t realise the pen I used would transfer to the paint. Pencil only from now on.

The clingfilm fared much better, and this is the method I’ll use next time (yes, there will be a next time) because it didn’t warp so the thickness was universal and the circle peeled off easily. 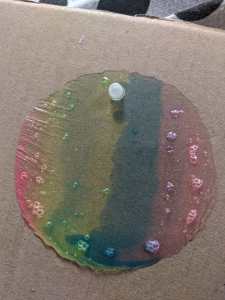 My only issue with this one is that the paint layer is so thin it’s barely visible when hanging in the window.  Next time I’m going to try using some kind of boundary, maybe a cookie cutter, so I can build the paint up thicker without it spreading out everywhere.

Conclusion: my experiment sort of worked, and it definitely helped me refine the process so next time it should work better. I’m happy with that!

I’m still plugging away at my swirl hat, and I looooove the way the colours are coming out.

Isn’t it pretty! There’s another stripe of green and yellow coming up and I’m excited to get it in there. I know, simple things 😉

It’s really interesting repeating a pattern after several months have passed. I made my first virus shawl back in July last year and I didn’t exactly struggle with it, but there were several points where I wasn’t entirely sure of myself.

There were times I wasn’t sure which stitch I should be working into so I had to count them, for every single repeat of every single row. I had to keep the chart near me at all times so I could check what I was doing every 5 minutes. No wonder it took me so long!

Fast forward to today, and I’m wondering how I ever struggled. It seems glaringly obvious which stitch I’m supposed to be working, and I’m racing along with barely a glance at the chart.   It’s great to have actual proof that I’m improving!

This one has a deadline so I’ll be focussing on it until it’s finished, and then I’ll get on with finishing my swirl hat (and everything else on my WIP list. Ahem).

That’s what I’m working on this week! How’s your week going? Got some WIPs to share? Let me know in the comments!

A thought occurs (don’t worry, I’m sitting down) – I don’t think I showed you the finished doily I was working on, did I?

This was a commission from a friend at choir who saw me crocheting my star blanket during rehearsals. He asked for something similar to go on his television unit, gave me some vague ideas about colours, and let me get on with in my own time.

The one issue I had is that his TV unit is rectangular, and he didn’t want the doily hanging over the edges, so a circular star blanket pattern wasn’t going to work. I did have a faff around with Google trying to find some patterns for oval doilies, but it only seemed to give me charts (which I couldn’t read at the time) or photos.

So instead I took the star blanket pattern and tweaked it a bit. 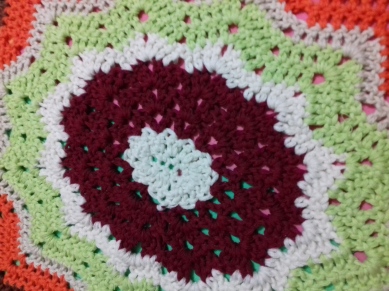 It kind of worked, but in hindsight I should have gone even further and made the beginning longer and thinner. I had to do some wizardry with singles and trebles towards the end because I realised if I kept going with double crochet all round, it would have been too long. 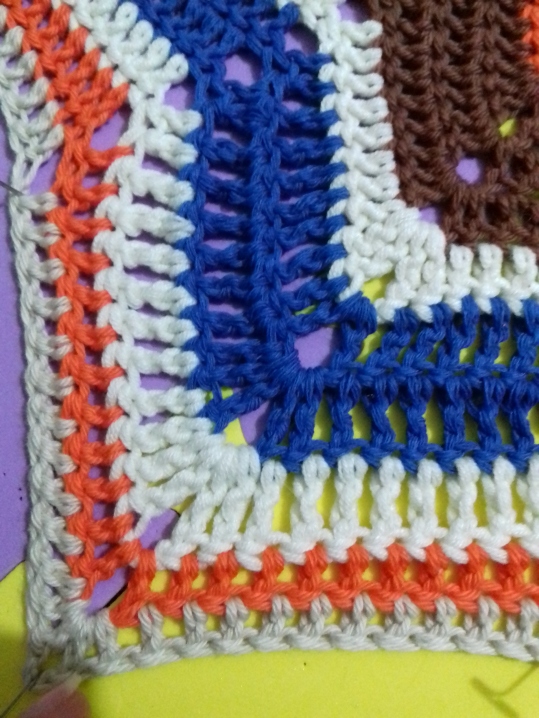 Trebles (on the same round)

I sent him a photo and told him the price and he was happy with both, hooray! So now all that’s left to do is hand it over and get the money. My favourite part 😉

How’s everyone’s week been? Got any FOs to share? Let me know in the comments!