Tunisian is so much fun, I decided to learn another stitch this week. Quite a few people mentioned the knit stitch after my last post, and I love the regularity of knit stitches, so I decided to give it a go.

Turns out it’s not as easy as the simple stitch (shocking, right?), and at first I made a whole swatch using…I don’t actually know if it’s a real thing.

For the knit stitch you’re supposed to pass the hook through the loop of the previous round, right here:

I totally misunderstood the tutorial (it wasn’t great) and went through the space at the side of the loop, like so: 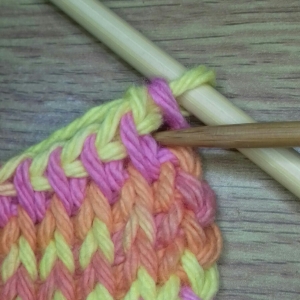 Which meant that I had to increase one stitch every single row or skip one at the start, which gave me a very wonky-edged swatch. It did look pretty though.

But considering I’ve never seen knitting like that in my life I figured I must have got it wrong. I frogged it, found a better tutorial, and had another go. 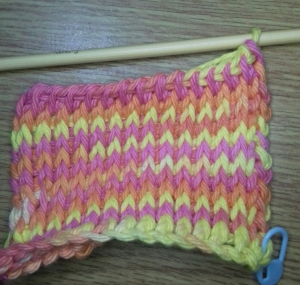 Much better! That’s the column layout I’ve come to know and love, so I’m now officially adding the Tunisian knit stitch to my repertoire.

Does anyone know if my first attempt was a different stitch or did I just make a mess? What do you think of the actual knit stitch? Let me know in the comments!

I hit a major snag with my swirl hat last week. I made a mistake, probably while I was watching The Flash finale, which would have been fine if I’d sorted it immediately.

But of course, I didn’t notice it until five or six rounds later

That stitch right there was where I went wrong. It doesn’t look too bad here, but the further round it went the more it threw the spirals out of alignment.

So I had to tink back five or six rounds, with yarn that seems to be 80% velcro and 20% stubbornness. Argh!

The good news is I did manage to fix it, and I’m now much more aware of mistakes as and when I make them.

Oh well, at least I’m back on track now.

How’s everyone else doing? Got some fun WIPs to share? Let me know in the comments!

Hi there *waves*. Despite appearances, I am still here!  A lot of rubbish, Life stuff has been going on, which took my blogging mojo away.

Thankfully my crojo has been unimpeded, and I’ve even managed some tangling as well:

I finished my virus shawl

It’s meant to be for the shop, but I’ve kind of fallen in love with it… 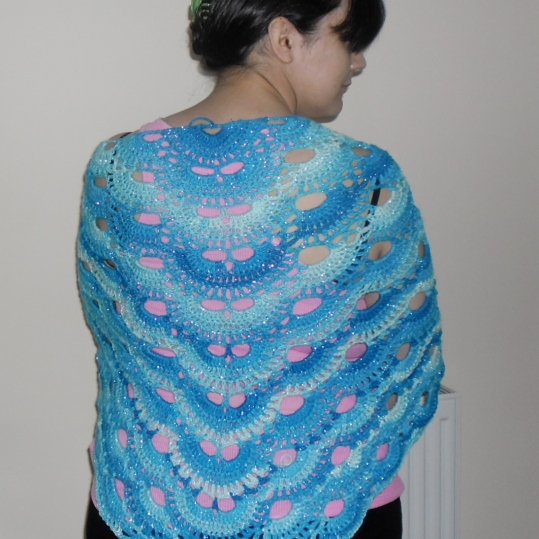 I made a card for Kelleys DIY giveaway.

I had to go all the way back to the green bit in the centre! Now I’m back out to the pink and so far it’s still behaving itself.

I also made a start on a couple of ideas I’ve had:

Can you tell what it is yet?
I’m taking steps to sort all this Life stuff out, and hopefully I’ll be back to blogging as normal soon 🙂