I am officially no longer allowed to say that I never win anything. Inspired by a conversation I had on Yolanda’s blogiversary giveaway (go check it out!), here’s a round up of my blogging wins from last year.

From Cherry Heart Blog I won a copy of Colourful Crochet by Marianne Dekker-Roos. 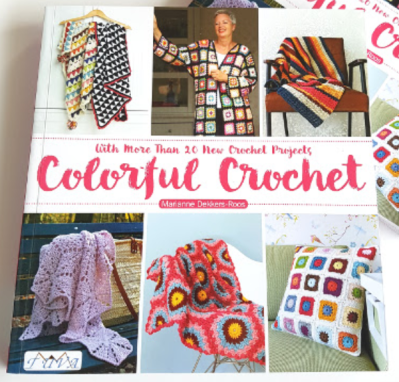 Even more wonderful, I immediately started a puff stitch scarf and when it started to go a peculiar shape I sent a message to Marianne on Instagram, and she answered me!! She talked me through it and we had a lovely conversation, and I basically felt like I was dreaming. I had a crochet conversation with a crochet superstar. Wow.

When Julias creative year had a blogiversary giveaway I knew instantly which card was my favourite, but also that I would have been happy if I won any of the lovely prizes. Then the results day came, and would you believe I won my favourite.

I was introduced to I am simply hooked through Stitching Santa (which is brilliant by the way – you should totally join this year!), and I really enjoyed reading and commenting on lots of posts. Then Jenny had a giveaway for guessing which of her items sold best. It was actually really hard to decide and I dithered for ages between the jellyfish and the cute spiders. In the end I went for jellyfish and I was right, hooray!

My prize was one of the fab jellyfish, which is now hanging quite happily from my pull-up bar.

And finally – remember I made some Daisies for Vicky?

These were sent down to England to be made into a blanket, which would then be raffled off to raise money for Victim Support. People could donate any amount they wanted, and every £1 was one entry into the raffle.

I think I donated £2 just to bring the total up to a round number, and with absolutely no expectation of winning when there were people who donated £10 or £20 or even more. But guess what?

Lynda’s Craft Room did an unbelievable job of joining the squares together, it’s so neat!! Then Lisa from the Wee House of Crochet sent it over and I have not stopped admiring it since.

Before anyone asks, yes I did do the lottery last year (several times) and no I didn’t even win a tenner. I suppose you can’t win them all!

So that was my incredibly lucky 2017. Did anyone else win last year? Let me know in the comments!

Here is my finished puff scarf, which I have wanted to show off since I finished it last Saturday morning! 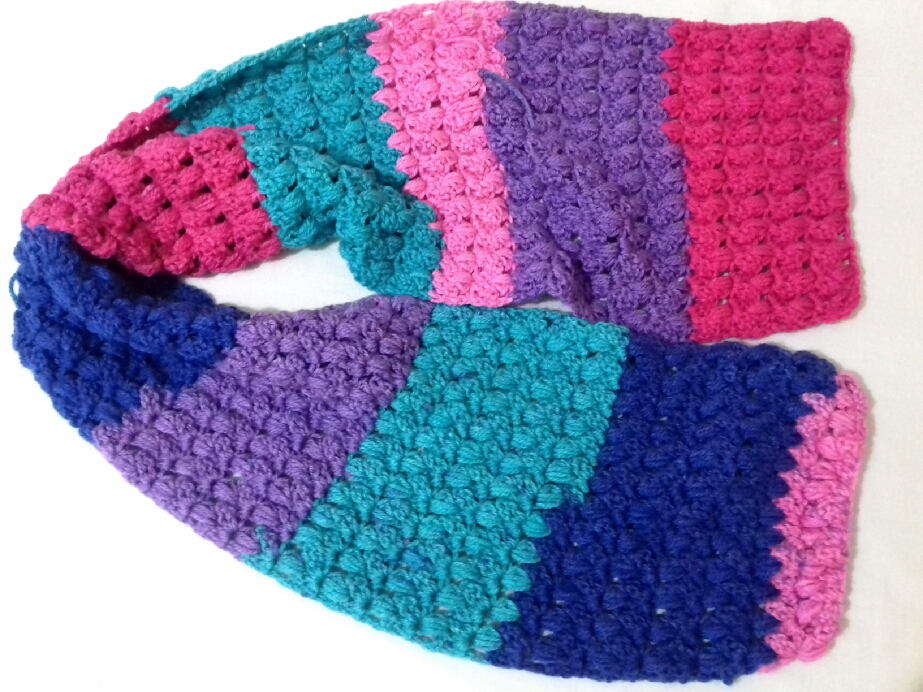 I’m really pleased with the colours now. So glad I had that other Caron Cake to play with.

Aside from that, I have no crochet FOs to show you. I’ve been working on the bigger items so it’ll take a wee while to finish them off. BUT I have been beavering away with my paper stash and have quite a few finished cards to show off: 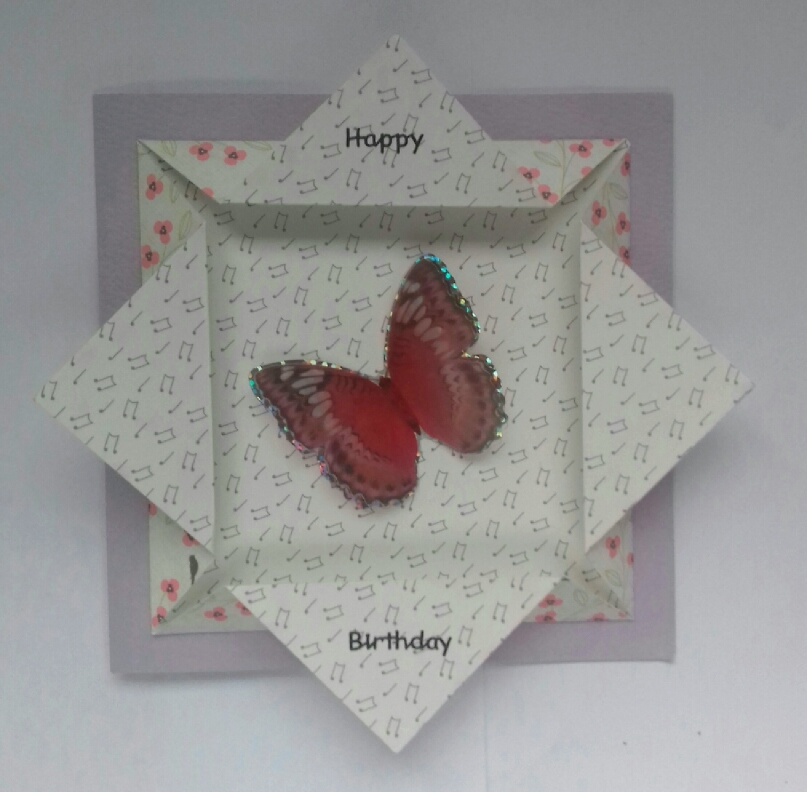 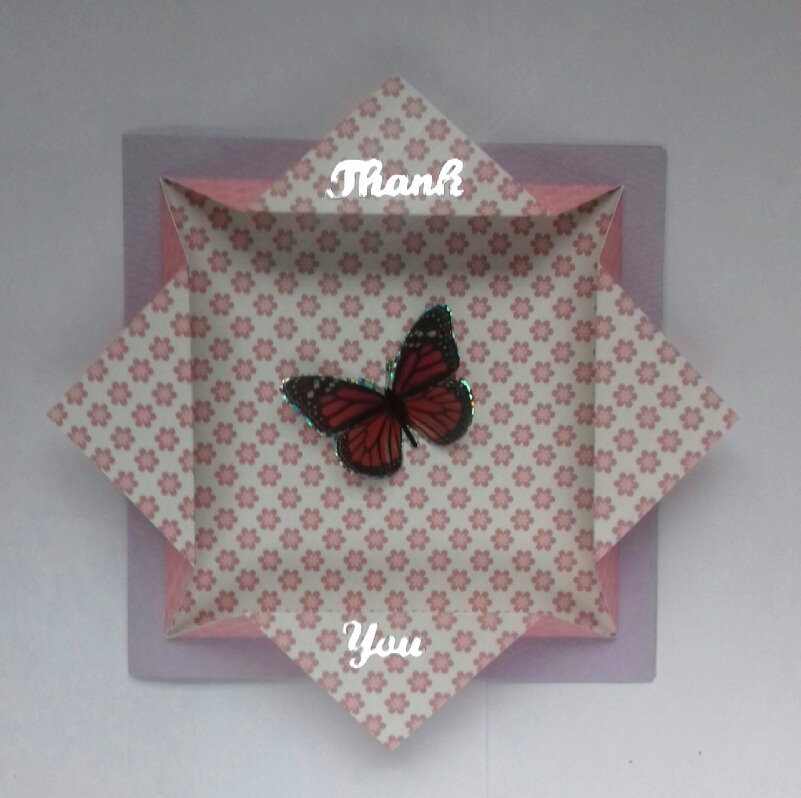 I learned this new technique and am doing it do death 😉

This idea came from Isn’t She Crafty, although I had to alter it a bit as I didn’t have any ribbon that went with the scraps.

Despite buying the least useful set of letters ever, I managed to make a few wooden scrabble tile cards. 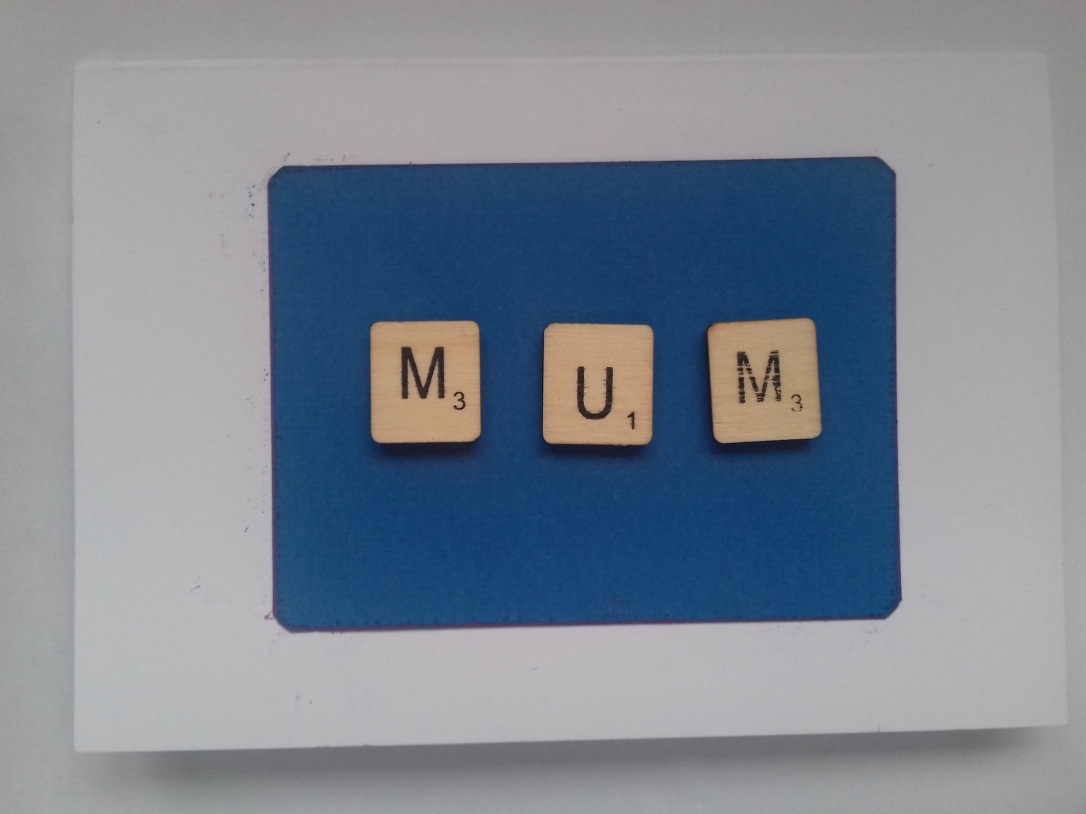 ‘Ren’, ‘Non’, and ‘Pare’ are some gender-neutral terms for children to call their parents, if you’re wondering.

I was really surprised at how well the yellow shows up on the card. I was expecting it sort of fade into the background, so I could stamp a different colour slightly off-centre and it would look like a shadow or reflection. In the end I liked it this way so much I just left it as it is!

So that was my rather productive week.

As I’m away next week helping out with a summer camp for girls, there won’t be any WIP Wednesday or FO Friday post. Or much crochet being done at all, really. So I probably won’t be liking or commenting until a week on Sunday at the earliest, but I will do my best to catch up when I can, and hopefully my scheduled posts will actually publish in the meantime!

How’s everyone’s Friday going? Got any FOs to show off? Let me know in the comments!

I’m doing so well – I’ve managed not to start a single new WIP since last week!

Here’s the progress I’ve made on the existing ones so far:

Well this is much bigger than I thought it would be. I was expecting a diddy thing about the size of my mini octopoms, but it’s as long as my whole hand.

All I have left to do is stitch the window dividers and attach the wheels, then I’m done!

I didn’t like the colour changes in the caron cake I used (there’s a tiny bit of light pink at the beginning, which was the only bit of light pink in the whole cake) so I did a bit of jiggery pokery with another Mixed Berry cake I just happened to have on hand. Thank goodness for BOGOF sales.

I’m really pleased with the colours now, and I love this pattern so much I’ve been trying to work out if I can make a matching hat. I’ve got to use the rest of the other cake somehow! 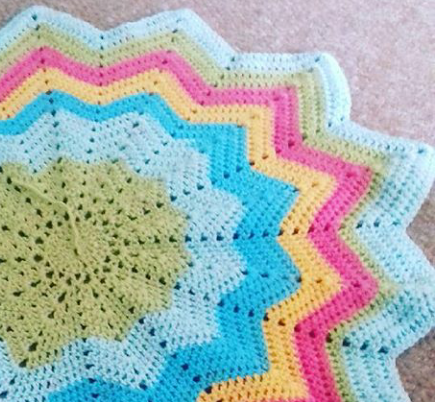 I’ve done a few rounds on this, keeping a beady eye on the join for each round, and so far I seem to be doing it right this time. But I know it’s a tricksy thing so I’m not going to relax my concentration for a second.

I’ve only made a wee start on this, but that’s better than nothing 🙂

No news on anything else from my long list. Even though I had a wonderful 4-day weekend off work, I also took out a stack of books from the library and I have not yet figured out how to read and crochet at the same time. For once, reading won.

Let’s see how many of these I can get ready for a FO Friday post!

What’s everyone else working on? Let me know in the comments!

I realised I have an awful lot of WIPs going on at the moment.  So I thought I’d name and shame, and hopefully that’ll motivate me to get some of them finished!

My mum asked me to make this, so of course it jumped straight to the top of my WIP list. Isn’t it cute! I really hope mine will actually look like the photo… 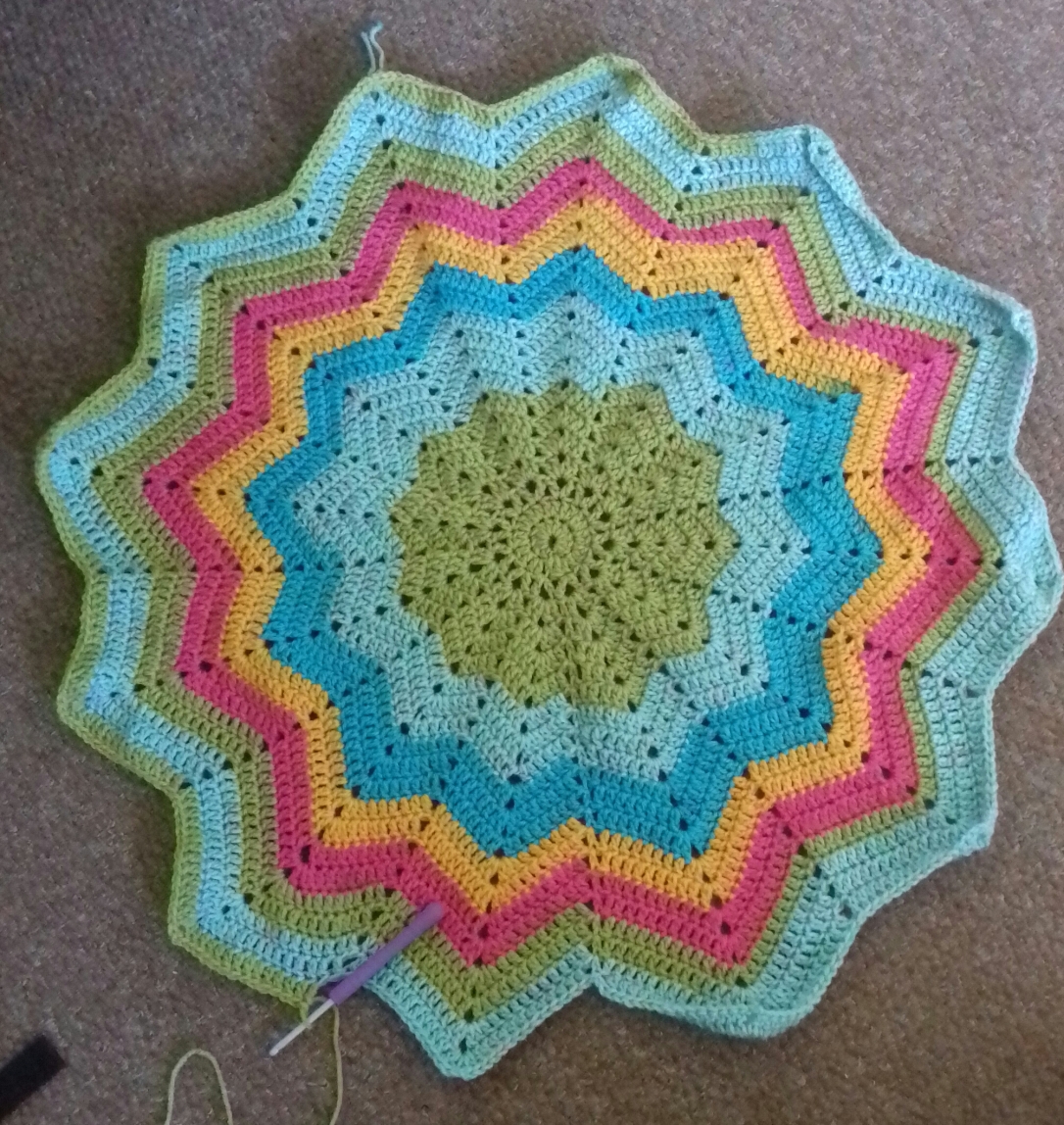 After frogging this thing almost back to the beginning twice, I can’t wait to get it done and crossed off the list.

Another commission, which I got by crocheting during my choir rehearsals. Craft in public, people; you never know what might come of it! I’ve waited over a month for the yarn to arrive so this is second on the priority list after the camper van. 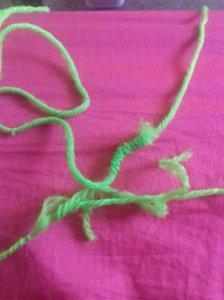 What is this yarn?? It’s terrible! But my cactus is turning out super cute despite my yarny struggles  🙂 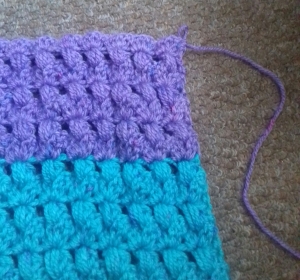 I’m still loving the puff stitch, and this scarf is growing super quick. I’ll probably be able to use it as soon as it’s finished if the Scottish weather keeps living up to its reputation.

Confession: I had completely forgotten about this scarf. I found it at the bottom of my WIP drawer and had an “oh yeah!” moment. Shame. 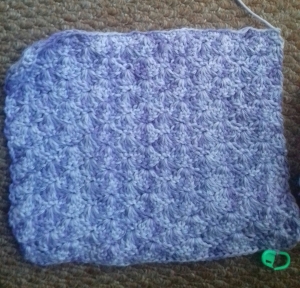 These are both nearly done, I’ve just been putting off the finishing touches for some reason.

It was supposed to be a baby blanket, but this is very old acrylic yarn that squeaks across my hook if I go too fast. You know the type. Nobody would put this anywhere near a baby’s skin.

I had an idea, which I’m still trying to work out. Hopefully there will be a post soon where I can declare it an amazing success! 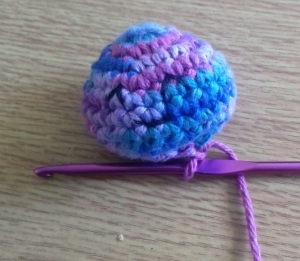 Another idea I had, which is proving somewhat successful. I’ve made two so far, tweaking the pattern each time, and this is my third attempt.

I also forgot about this. More shame.

So there’s my list. My looooong list. I think it’s time to implement a new rule: no new WIPs until this lot is finished!

What’s everyone else working on? Got more than one WIP on the go? Let me know in the comments

And also WIP Wednesday. I love a twofer!

I’m making a Puff Scarf, which uses a TON of puff stitches, as the name suggests.  These are the squishiest stitches I have ever squished! I loves them!

Here’s how to make your own squishy goodness (am I saying squish too much??)

Yarn over, go into the space, and pull up a loop to the height of a stitch (dc in this case)

go into the same stitch and pull up another loop 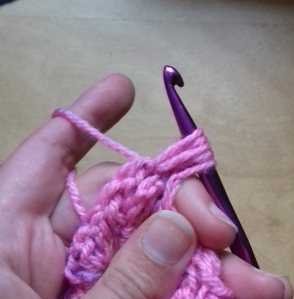 Now there are 9 loops on the hook. One final yarn over, and pull through all 9 loops

Then it’s just a chain to secure it, and you’re done!

Do it enough times and you’ll end up with a super squishy (I just can’t stop saying it!), beautiful scarf. I’m using a Mixed Berry Caron Cake and so far it looks like this

I’m probably very late to the puff stitch party, what have other people made with it? What do you think of my scarf? Let me know in the comments!