There is no tutorial for this tangle (it’s pretty obvious, really), but you can check out the official page here. 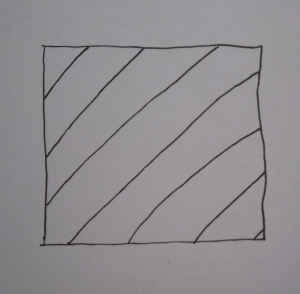 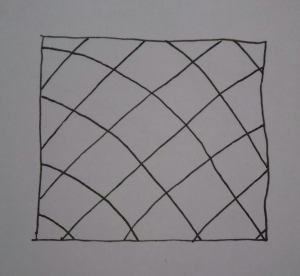 Nice and simple, but also pretty easy to jazz up if I want to, with gems or pearls at the crossovers rather than just filled in squares, or highlighting some of the lines with gold or silver gel pens. Simple, but pretty effective! Which you will see, just as soon as I get my shop updated….

So what do you think of Florz? Any other ideas for fancying it up? Let me know in the comments!

For example, you’ll have noticed that some of my photos are truly terrible

That’s because the smarphone I got was an old one that my friend gave me because she hadn’t used it for ages. In limited light, that’s the best the wee camera can do.

It’s so old that at least 10 of my apps keep shouting at me to update them, but I can’t because the updates are bigger than the memory of the phone. This includes Facebook and Instagram, both of which I’m hoping to use to promote QWC.

So you see, I absolutely had to get a new phone! It’s arriving on Sunday and, considering I don’t really care about technology, I’m quite excited about it. It’s not an all-singing all-dancing latest model of course; just new enough to let me do everything I want to do.

This is also my first contract that includes data (Confession: I had to look up what that even meant) so when I spy some inspiration out and about I can share it there and then, instead of trying to remember when I get home three hours later.

So, get ready for some new and improved photos and possibly some links to my social media accounts coming up. Or just some confusion as I’m dragged kicking and screaming into the 21st century. We’ll find out.